Skip to content
Closed. This question needs debugging details. It is not currently accepting answers.

Want to improve this question? Update the question so it’s on-topic for Stack Overflow.

I’ve come up with a pattern which I thought would work for this and I’ve looked at what other people have done and they’ve done the same thing, such as here: http://code.jasonbhill.com/python/project-euler-problem-15/ But I always get a different answer. Here’s my code.

edit: In response to Edward, I think my method is currently what you said before your edit in that this isn’t about brute force but I’m just summing the possible ways from each point in the grid. However, I don’t need a 2d array to do this because I’m only looking at possible moves from only the side. Here’s something I drew up to hopefully explain my process. 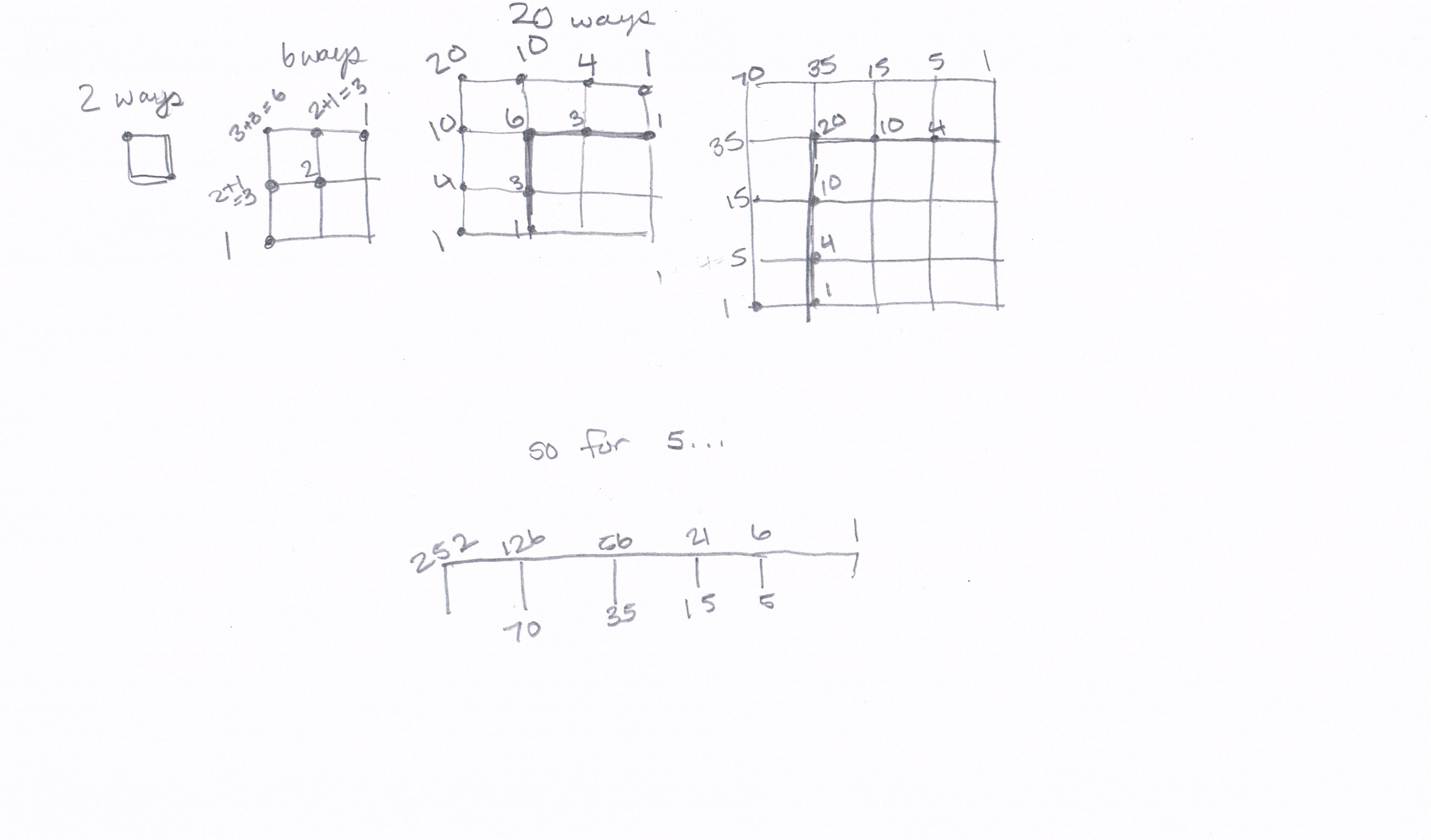 So for a 1×1. Like you said, once you reach the limit of one direction, you can only travel in the limit of the other, so there’s 2 ways. This isn’t particularly helpful for a 1×1 but it is for larger ones. For a 2×2, you know that the top corner, being the limit of right, only has 1 possible path from that point. The same logic applies to the bottom corner. And, because you have a square which you have already solved for, a 1×1, you know that the middle point has 2 paths from there. Now, if you look at the sides, you see that the point for instance that has 2 beneath it and 1 to the right has the sum of the number of paths in those adjacent points so then that point must have 3 paths. Same for the other side, giving the top left corner the sum of 3 and 3, or 2 times 3.

You have a two dimensional array of points, where you can chose to only travel away from the origin in the x or the y direction. As such, you can represent your travel like so:

some things become immediately obvious. The first one is that any path through the mess is going to require x + y steps, travelling through x + y + 1 locations. It is a feature of a Manhattan distance style path.

The second is that at any one point until you hit the maximum x or y, you can select either of the two options (x or y); but, as soon as one or the other is at it’s limit, the only option left is to chose the non-maximum value repeatedly until it also becomes a maximum.

With this you might have enough of a hint to solve the math problem. Then you won’t even need to search through the different paths to get an algorithm that can solve the problem.

Each two dimensional array of paths can be broken down into smaller two dimensional arrays of paths. So the solution to f(3, 5) where the function f yields the number of paths is equal to f(2, 5) + f(3, 4). Note that f(0, 5) directly equals 1, as does f(3, 0) because you no longer have “choices” when the paths are forced to be linear.

Once you model the function, you don’t even need the array to walk the paths….

likewise (because it’s the mirror image)

Ok, so now you may get the idea that you have really two choices (go down) or (go right). Consider a bag containing four “commands”, 2 of “go down” and 2 of “go right”. How many different ways can you select the commands from the bag?

Such a “selection” is a permutation, but since we are selecting all of them, it is a special type of permutation called an “order” or “ordering”.

You could probably do a 20*20 by hand if you needed, but the factorial formula is simple enough to do by computer (although keep an eye you don’t ruin the answer with an integer overflow).