However it doesn’t fully answer my question. My situation is that I have multiple parts of the application using indexedDb differently. One particular instance of indexedDb needs to be as fast as possible (“high-priority”) and it stores only 60-100kb in total. Another one needs to use it much later (“low-priority”) when the page renders (possibly after 1-2 seconds) and it can store upto 1.5mb of data.

Currently I have each part of the application call a common indexedDb library to create their own instances of indexedDb , which results in 4-5 instances. 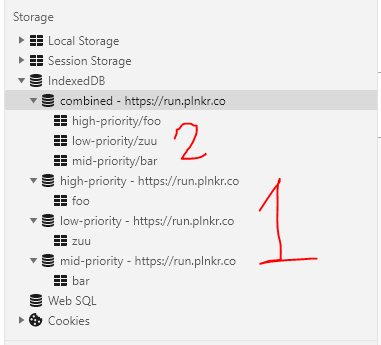 Here number 1 would be the existing architecture and number 2 is the new proposal design.

Essentially my question is, would moving to number 2 proposal cause “high-priority” table to be accessed slower than before? If the change isn’t drastic, I’d like to move to number 2 to avoid opening multiple indexedDb instances hence making the overall performance better.

The difference was minimal (1.8ms vs 2.2ms) when using performance API to measure the time it took.