For most other libraries I have type completion, but this one does not work.

As I mentioned, changing to import syntax fixes the issue, but I want it to work with require too.

How can I have type completion on this library with CommonJS?

To bridge fundamental differences between CommonJS and ES module syntax, require('node-fetch') returns an object with this shape: 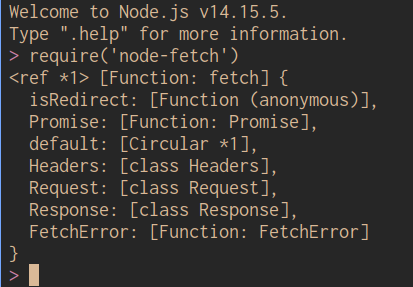 Notice the node-fetch type definition does export the fetch() function as the top level, but also exports a default property for compatibility with ES module syntax. Using this property fixes autocomplete issues.

This still seems like a bug to me, but this workaround does resolve the issue.