I’ve tried plotting graphs in my Flask web app using Plotly which didn’t work for some reason so I started to simplify the issue to find the error.

It seems like there is an issue with the Jinja Syntax {{ myJSONfile | safe }} in javascript.

Aslong as I pass an empty string “” to the variable the graph renders but obviously without datapoints.

According to this post I should have written the the syntax inside the javascript block correctly in order to pass a JSON-File to the javascript variable and I am out of ideas right now.

I’ve since tested out another test code from a tutorial github repository to eliminate the possibility that it may have been some typing errors in my code I wasn’t able to identify. But those copy paste examples gave me the same issue.

During debug I clearly see that the JSON file is created successfully and holds the desired data, Flask/Jinja just doesnt want to communicate with Javascript

Here’s an additional Screenshot of how the syntax highlighting looks in my VS Code. (Other than in this particular case my Flask app is running fine, being able to render pages dynamically etc.) 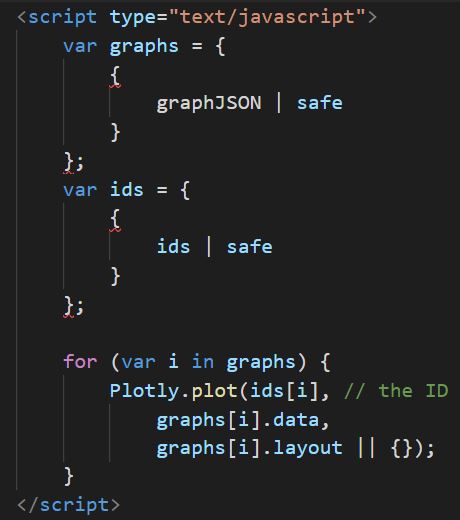 (Syntax not recognized in the javascript part)

The problem here lies with VSCode, especially with Syntax Highlighting and Formatting Extensions. There is some conflict between some of your enabled extensions which – on save – format the javascript code in above way.

This way on save the syntax doesn’t get shredded anymore making the JavaScript recognize your JSON-File correctly.