Every element from my scene is made of a chain of 3 Object3Ds. The order parent-to-child is cellPivot -> modifier -> setup

setup‘s purpose is to permanently align a loaded object by resizing / giving some padding that must always be there. It is not supposed to be changed once set

An example why all this is needed: let’s say I have a vertical door in an orthographic perspective that I wanna fit in a 1×1 space, so I give some padding on the x-axis to align the door in the center, similar to the picture below where the orange block is the door

Since I want to move this in any cell in the map, I use cellPivot‘s position to decide where. I can’t use right away modifier since sometimes I wanna rotate the model inside the cell, which requires to modify both position and rotation (since my models are not built around (0, 0, 0), but along +X and +Z)

I have succesfully managed to rotate these doors by rotating modifier around the center of the model (which acts as a pivot). Here’s the functions that does the rotation:

The line that rotates the door and works:

I’m now trying to do something similar with the player too. I record what keys are pressed, I calculate the normal of the vector of desired direction (if I press W and D I’ll get (1, 1), if I press just W I’ll get (0, 1)), after which I use the following line to detect the angle at which the user wanna move:

I have already tested that the angle is correct. On top of that, the codebase before “rotating around a pivot” used the same code and it worked fine

If the user just keeps a key pressed, then abs will make sure that no visible rotation is made (since theta will be 0)

Here’s the problem: everytime I press A, be it in combination with W or S or not, the character will rotate like insane. I put after the line from above the following code to see what’s happening: 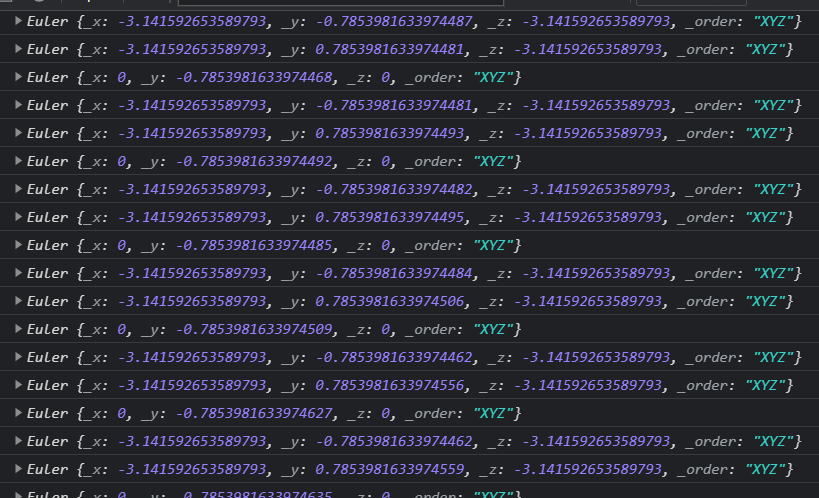 As you can see, x and z are reaching -pi, and y bouces back and forth. This does not happen for any other combination that does not contain key A

I got these in console while trying to move in the problematic positions:

This is the result of running this.rotateOnAxis(axis, theta). I have changed this exact line with this.rotation.y += theta. Now everything is working as it should be: no weird -pi and rotAfterRot.y is actually theta

My guess is that rotateOnAxis is also counting other features of the object, like position, but still can’t figure how it spits that -pi