I am having a little trouble understanding one of the steps in this proof.
From Stephen Abbott’s Analysis:

Using AoC to prove the IVT: 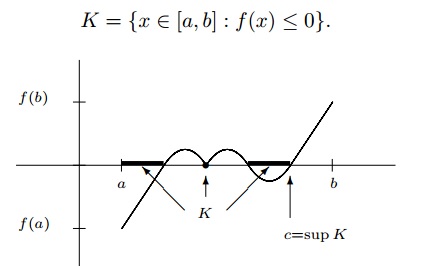 Clearly we can see $K$ satisfies the axiom of completeness, and thus we can let $c = sup K$

Part where I have difficulty understanding the proof
. The author states:

I don’t understand how we can conclude this immediately?

As Wojuvu said, it does require an extra step of proof.

First of all, the claim

Thinking about it, if $f(c)>0$, then $cnotin K$ so this would contradict c being a least upper bound.(Right?)

To rule out the two cases $f(c)>0$ and $f(c)<0$ in the proof you will need to use the continuity of $f$. (Note that the theorem requires a continuous mapping, as can be seen with some examples of step-functions, and we have not yet used continuity.) For both cases the idea is similar: if, for example you would have $f(c)>0$, then you should be able to find an $varepsilon > 0$ such that for all points $z in (c – varepsilon,c) $ you have $f(z) > 0$. And this would be a contradiction with $c$ being the least upper bound.