pyreverse is a great tool to generate UML diagram from Python codes. However, I found it cannot identify all the classes that has been used within a function. I take the following example to illustrate my point:

The reason is the scope of object_a: it is a local variable of the function and not an instance variable. The relationship of C with A is therefore not structural. Hence, it is not an UML association (nor aggregation, nor composition).

At best, we could say there is a usage dependency from C to A. But this usage is specific to the implementation and not necessarily meant by design.

I’m not a Python expert, but if pyreverse is able to spot the right relation with object_b, and if you’d make object_a an instance variable with self.object_a in the assignment, you can hope to get the result that you expected.

If the class C is corrected as explained: 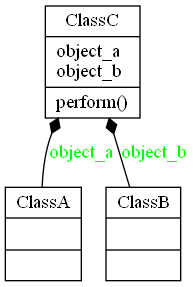 For a human reader, it’s easy to miss a property. This is why pylint issues a warning on this code: