I am trying to use the BK-tree data structure in python to store a corpus with ~10 billion entries (1e10) in order to have a fast fuzzy search engine.

Once I add over ~10 million (1e7) values to a single BK-tree, I start to see a significant degradation in the performance of querying.

I was thinking to store the corpus into a forest of a thousand BK-trees and to query them in parallel.

Is it a feasible idea to create and query 1,000 BK-trees simultaneously? What else can I do in order to use BK-tree for this corpus.

I use pybktree.py and my queries are intended to find all entries within an edit distance d.

Is there some architecture or database which will allow me to store those trees?

Note: I don’t run out of memory, rather the tree begins to be inefficient (maybe each node has too many children).

Since you are mentioning your usage of FuzzyWuzzy as distance metric I will concentrate on efficient ways to implement the fuzz.ratio algorithm used by FuzzyWuzzy. FuzzyWuzzy provides the following two implementations for fuzz.ratio:

I am the author of the library RapidFuzz which implements the algorithms used by FuzzyWuzzy in a more performant way. RapidFuzz uses the following interface for fuzz.ratio:

The additional score_cutoff parameter can be used to provide a score threshold as a float between 0 and 100. For ratio < score_cutoff 0 is returned instead. This can be used by the implementation to use more a more optimized implementation in some cases. In the following I will describe the optimizations used by RapidFuzz depending on the input parameters. In the following max distance refers to the maximum distance that is possible without getting a ratio below the score threshold.

The similarity can be calculated using a direct comparison, since no difference between the strings is allowed. The time complexity of this algorithm is O(N).

The similarity can be calculated using a direct comparisons as well, since a substitution would cause a edit distance higher than max distance. The time complexity of this algorithm is O(N).

A common prefix/suffix of the two compared strings does not affect the Levenshtein distance, so the affix is removed before calculating the similarity. This step is performed for any of the following algorithms.

The BitPAl algorithm is used, which calculates the Levenshtein distance in parallel. The algorithm is described here and is extended with support for UTF32 in this implementation. The time complexity of this algorithm is O(N).

The Levenshtein distance is calculated using Wagner-Fischer with Ukkonens optimization. The time complexity of this algorithm is O(N * M). This could be replaced with a blockwise implementation of BitPal in the future.

FuzzyWuzzy provides multiple processors like process.extractOne that are used to calculate the similarity between a query and multiple choices. Implementing this in C++ as well allows two more important optimizations:

I performed benchmarks for extractOne and the individual scorers during the development that shows the performance difference between RapidFuzz and FuzzyWuzzy. Keep in mind that the performance for your case (all strings length 20) is probably not as good, since many of the strings in the dataset used are very small.

The source of the reproducible-science DATA :

The hardware the graphed benchmarks were run on (specification) :

The code for this benchmark can be found here 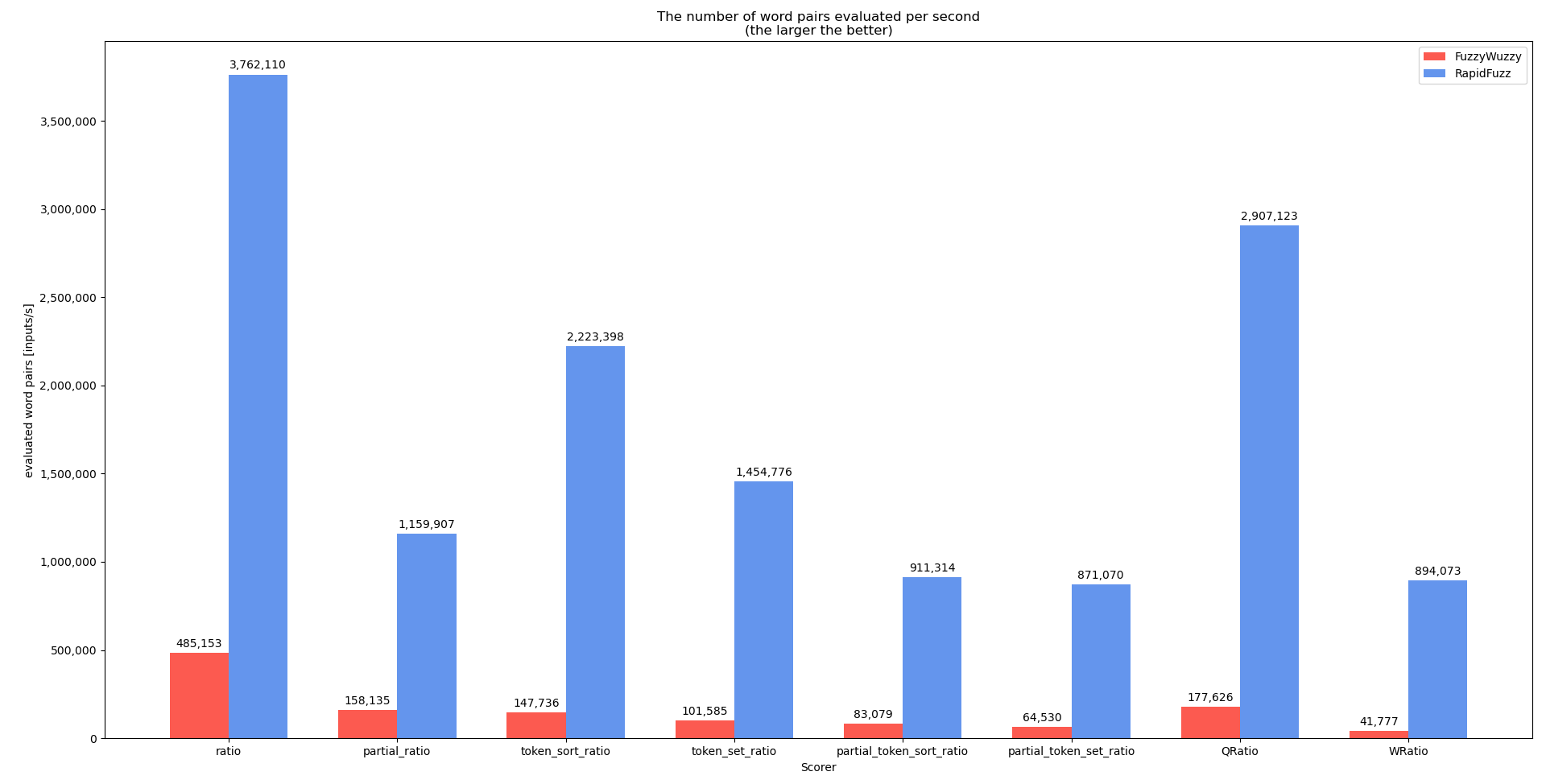 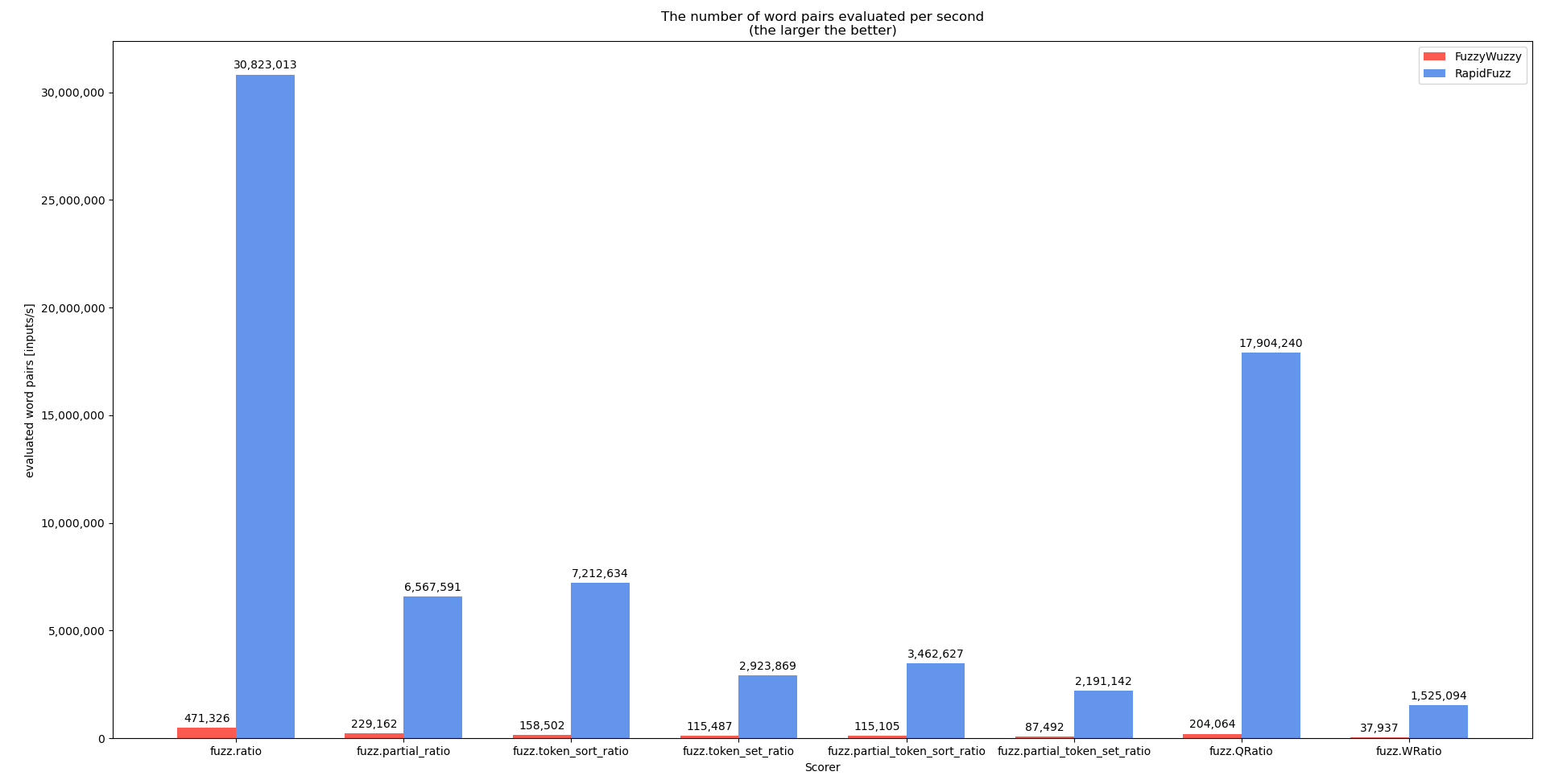 This shows that when possible the scorers should not be used directly but through the processors, that can perform a lot more optimizations.

As an Alternative you could use a C++ implementation. The library RapidFuzz is available for C++ here. The implementation in C++ is relatively simple as well

or in parallel using open mp

On my machine (see Benchmark above) this evaluates 43 million words/sec and 123 million words/sec in the parallel version. This is around 1.5 times as fast as the Python implementation (due to conversions between Python and C++ Types). However the main advantage of the C++ version is that you are relatively free to combine algorithms whichever way you want, while in the Python version your forced to use the process functions that are implemented in C++ to achieve good performance.