For a project, I need to be able to sample random points uniformly from linear subspaces (ie. lines and hyperplanes) within a certain radius. Since these are linear subspaces, they must go through the origin. This should work for any dimension n from which we draw our subspaces for in Rn.

I want my range of values to be from -0.5 to 0.5 (ie, all the points should fall within a hypercube whose center is at the origin and length is 1). I have tried to do the following to generate random subspaces and then points from those subspaces but I don’t think it’s exactly correct (I think I’m missing some form of normalization for the points):

I’m not really good at visualizing the 3D stuff and have been banging my head against the wall for a couple of days.

Here is a perfect example of what I’m trying to achieve: 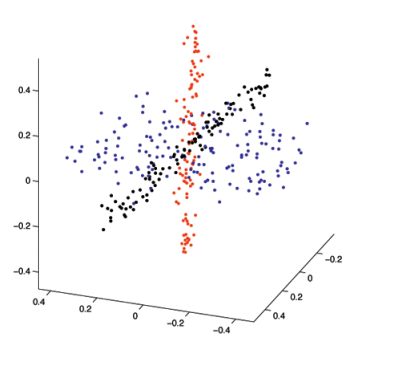 Yes, you identified the issue correctly. Let me sum up your algorithm as it stands:

This works, except for one detail: the basis coeffs is not an orthonormal basis. The vectors of coeffs do not define a hypercube of side length 1; instead, they define a random parallelepiped.

Please note that this method returns a rotated hypercube, aligned with the subspace. This makes sense; for instance, if you want to draw a square on a plane embed in R^3, then the square has to be aligned with the plane (otherwise it’s not in the plane).

If what you wanted instead, is the intersection of a dimension-n hypercube with the dimension-p subspace, as suggested in the comments, then please do clarify your question.