Skip to content
Closed. This question does not meet Stack Overflow guidelines. It is not currently accepting answers.

Want to improve this question? Update the question so it’s on-topic for Stack Overflow.

I need to be able to manipulate a large (10^7 nodes) graph in python. The data corresponding to each node/edge is minimal, say, a small number of strings. What is the most efficient, in terms of memory and speed, way of doing this?

A dict of dicts is more flexible and simpler to implement, but I intuitively expect a list of lists to be faster. The list option would also require that I keep the data separate from the structure, while dicts would allow for something of the sort:

What would you suggest?

Yes, I should have been a bit clearer on what I mean by efficiency. In this particular case I mean it in terms of random access retrieval.

Loading the data in to memory isn’t a huge problem. That’s done once and for all. The time consuming part is visiting the nodes so I can extract the information and measure the metrics I’m interested in.

I hadn’t considered making each node a class (properties are the same for all nodes) but it seems like that would add an extra layer of overhead? I was hoping someone would have some direct experience with a similar case that they could share. After all, graphs are one of the most common abstractions in CS.

I would strongly advocate you look at NetworkX. It’s a battle-tested war horse and the first tool most ‘research’ types reach for when they need to do analysis of network based data. I have manipulated graphs with 100s of thousands of edges without problem on a notebook. Its feature rich and very easy to use. You will find yourself focusing more on the problem at hand rather than the details in the underlying implementation. 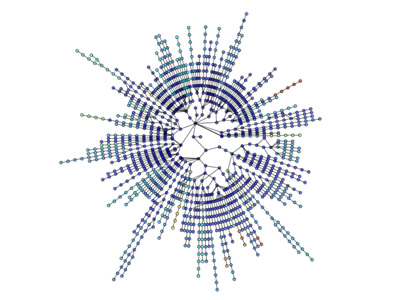