Why is numba not speeding up the following piece of code?

I thought numba was made for these sorts of tasks, where you have for loops combined with numpy operations. Yet this jitted function is 2-3x slower than the pure Python variant (i.e. the same function but without the jit), and yes I have run it after it was compiled.

Am I doing something wrong?

The performance of the Numba implementation is not mean to be faster with relatively big array (eg. > 1024). Indeed, both Numba and Numpy use a compiled sorting algorithm as Numba does (except Numba use a JIT). Numba an only be better here for small arrays because it can mostly remove the overhead of calling a Numpy function from the CPython interpreter (and performing many input checks). The running time is dominated by the time of the sorting calls and not the overhead of the loop for an array of size=5000 (see below).

Here is the runtime execution of the two implementation plotted against the array size tested on random arrays on my machine (with 32-bit integers from 0 to 1,000,000,000): 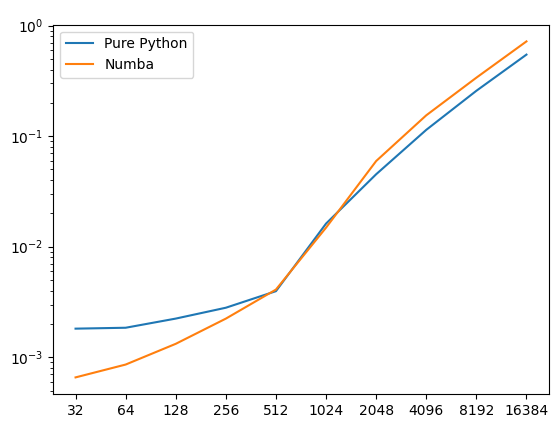 One can see that Numba is faster for small arrays and faster for big ones. When len=5000, the Numba implementation is 50% slower.

Note that you can tune the algorithm used using the parameter kind. Note also that some Numpy optimized implementations use parallelism so that primitives can run faster. In that case, the comparison with the Numba implementation is not fair as Numba should use a sequential implementation (especially if parallel=True is not set). Besides this, this problem appear to be a well known issue and developers are working on it.