TL;DR edit in retrospect years later: there’s no solution that’s not gross as long as it’s just state data – you’ll need to also get it into a separate store somewhere somehow and can do whatever you want at that point. But read the question and the answer and the back-and-forth if you want some more background.

I have a table of two sections, each with various input values. Let’s say that it is a survey. Feeding data into this is straightforward; I have the typical model:

I put the model into a prop on the survey and the right information is trickled down into the subcomponents. Each ValueRow has a text field and its ephemeral value reflected back into its own state. This works fine “on the way down”, in the one way flow that React is built for.

However, I also wish to show progress on the Section level and for the entire Survey, both simple things like number of fields filled out and statistical data needing the entire data set – what’s the average across sections, how many “1” answers do I have in total, what’s my grade (calculated from all the answers) and so on. Essentially, I’d also want to have:

This turns into a reduction of the current state instead of the model data. What’s the best way of doing this in React? Flux and Actions and Stores all seem to deal with how to handle the data once it has been committed to the model. What I want to do is to pluck all the state data and do something with it, but it also seems terribly gross for the SurveyWideStats element, for example, to go poking through the garbagestate of its sibling element’s children.

My current solution is to pass around an accumulation object and provide enough state to each component that it can keep calling that whenever something changes. This seems clear and divided enough, but it means that I have to have two passes and have to be careful not to start fiddling with state during rendering (at least since that’s when I call the accumulation object – I suppose there may be a better point during the lifecycle where I could call that). And in addition, it seems like this would be an obstacle to “pick up from” server side rendering.

What’s the best way? Is there an established pattern for this – preferably one where these things don’t have to be so custom and really tailored to the data all the time?

Two ways to do this:

UPDATE:
To handle changes by the user when they change an input value, you have two options, depending on your preference:

UPDATE:
As a bonus, below the flow for updating stores and components. 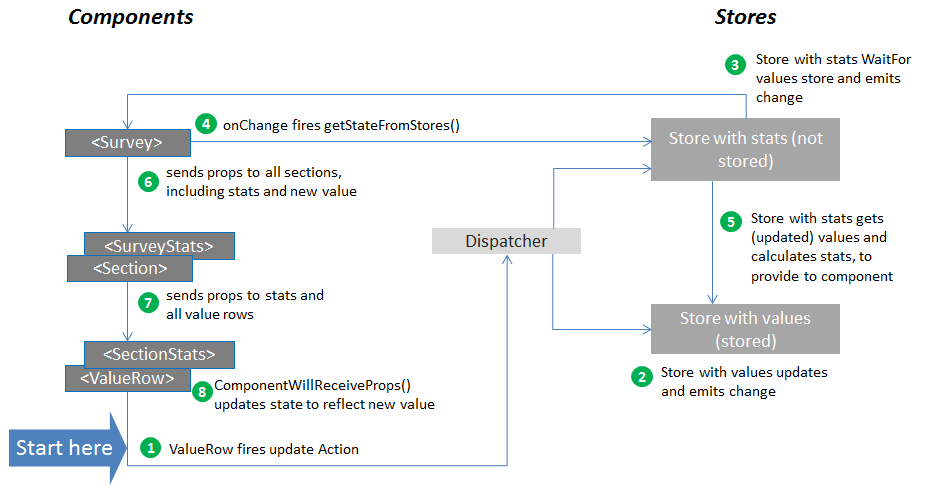